By Lily Kuo in Beijing

Beijing authorities have locked down residential compounds and fired officials over a new Covid-19 outbreak as health officials warned the risk of the outbreak worsening was “very high”.

On Monday, authorities announced 49 new cases, 36 of which were linked to the Xinfadi seafood supermarket in Beijing’s southern Fengtai district. The market was closed on Saturday after it was identified as being at the centre of a new cluster of cases.

“The risk of the epidemic spreading is very high, so we should take resolute and decisive measures,” Xu Hejian, a spokesman for the Beijing city government, said at a press briefing on Monday. On Sunday he said Beijing had entered “an extraordinary period”. 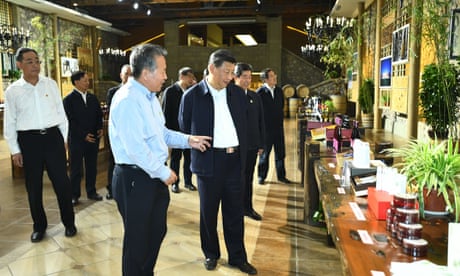 As of midnight on Sunday night, 10 residential neighbourhoods around a second seafood market, Yuquandong market in Haidian where one asymptomatic case was found over the weekend, had been shut. On Monday, officials said cases at Yuquandong were linked to the Xinfadi market. Residents have been ordered to quarantine at home and undergo tests for the virus.

Beijing, which had previously gone 55 days in which the only new infections were citizens returning from other countries, has reported a total of 79 cases in the past four days. The first case in the new outbreak was discovered on Thursday after a 52-year old man surnamed Tang was confirmed to have the virus. On Friday, authorities reported another six cases – all of them, including Tang, linked to the Xinfadi market.

Authorities fear the virus spreading from Beijing. Several Chinese cities have urged their residents not to travel to the capital. At the weekend, Liaoning province and the surrounding Hebei province reported new cases believed to be connected to those in Beijing. On Monday, Sichuan province reported one suspected case.

Residential compounds in Beijing have reinstated security checks and made loudspeaker announcements, phone calls and house visits asking all residents who have visited the Xinfadi market to report their recent travel. 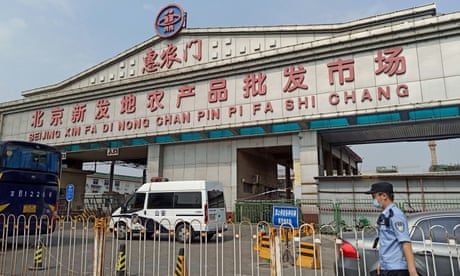 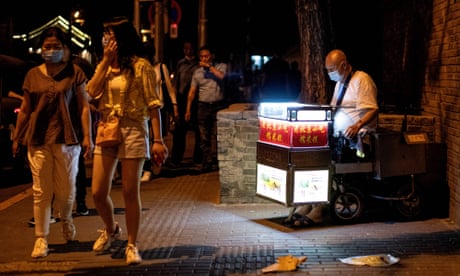 On Sunday, Beijing ordered all companies to require any employees who have visited the Xinfadi market or had contact with those at the market to quarantine at home for 14 days. Authorities said on Sunday that more than 70,000 people were tested – 59 of whom tested positive for the virus.

The new cases in Beijing are especially alarming given the strict travel restrictions and quarantine measures the city imposed to prevent cases from other parts of the country spreading to the capital. Beijing had begun to return to normal with residents returning to work and going out again.

On Monday, two party officials in Fengtai district, where the Xinfadi market is located, were dismissed while the manager of the market was also fired, according to state media for “failing to implement” proper virus prevention and control work.

Samples taken from the market have shown traces of the virus on imported fish and meat. Yang Peng, an epidemiologist with the Beijing city government said the virus might have come from overseas but more investigation was needed.

Coronavirus: the week explained – sign up for our email newsletter

China, which has reported a total of 83,000 Covid infections and an official death toll of 4,634, has bragged of its success in beating the virus. But analysts and researchers have cast doubt on the reported figures while critics have underlined the suppression of information during the early critical weeks of the outbreak.

Globally, confirmed cases have now passed 7.9 million, with more than 433,ooo deaths, according to the Johns Hopkins tracker.

Global Times editor Hu Xijin wrote on Twitter: “There is no way Beijing becomes Wuhan 2.0. The world will see China’s powerful capacity in controlling the epidemic, including government’s strong leadership, respect to science, public’s willingness to cooperate and nationwide coordination of control measures. We will win again.”

What is a leader for …

… if they can’t lead us out of crisis? From the coronavirus pandemic and police brutality to the marginalisation of minority communities around the world, leadership is broken. Devoid of the humility and inclusivity we so desperately need, and given to narcissism, leaders are gambling with public health, safety and the future of younger generations. They unapologetically prioritise serving themselves over the people they were elected to serve. We have to make them raise their game.

That’s what the Guardian’s here for. As an open, independent news organisation we investigate, interrogate and expose the incompetence and indifference of those in power, without fear. Our journalism is free from political and commercial bias – this makes us different. We can give a voice to the oppressed and neglected, and stand in solidarity with those who are calling for a fairer future. With your help we can bring about improvement.

Millions are flocking to the Guardian for quality news every day. We believe everyone deserves access to information that is fact-checked, and analysis that has authority and integrity. That’s why, unlike many others, we made a choice: to keep Guardian reporting open for all, regardless of where they live or what they can afford to pay.

We’re determined to provide journalism that helps each of us better understand the world, and take actions that challenge, unite, and inspire change – in times of crisis and beyond. Our work would not be possible without our readers, who now support our work from 180 countries around the world.

But news organisations are facing an existential threat. With advertising revenues plummeting, the Guardian risks losing a major source of its funding. More than ever before, we’re reliant on financial support from readers to fill the gap. Your support keeps us independent, open, and means we can maintain our high quality reporting – investigating, disentangling and interrogating.

Every reader contribution, however big or small, is so valuable for our future.

By George Onmonya Daniel  Boss Mustapha’s Taskforce on Covid 19 is gradually falling apart. This is because nobody is listening to them and complying...